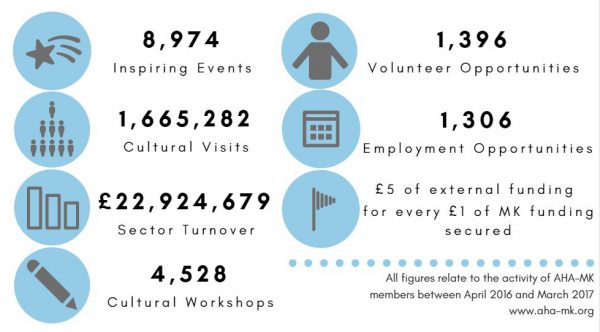 Each year we collect data from our members to show the impact of arts and heritage in Milton Keynes.  This year the combined impact of our members is:

Our Annual Report collates data from our members and presents it in a one-page summary that we disseminate to our members and Trustees, as well as to Councillors, funding bodies, stakeholders and businesses – spreading the word about the great work our members deliver. By collaborating in this way, our members are able to demonstrate impact much more effectively than they can on their own.

The Arts and Heritage Alliance Milton Keynes received the below statement relating to the decision to withdraw the UK European Capital of Culture competition:

On Tuesday we met with representatives of the Department for Digital, Culture, Media and Sport including John Glen MP, Parliamentary Under Secretary of State for Arts, Heritage and Tourism. We met to discuss the letter sent last week to the UK Government by the European Commission stating that the participation of the UK in the European Capital of Culture in 2023 will not be possible.

Firstly we want to acknowledge the huge and passionate support we have all received locally, nationally and internationally since the receipt of this letter. In particular we appreciate the support from previous and future European Capitals of Culture, and from members of the independent judging panel which itself had expected to be interviewing our teams this week as part of the formal shortlisting process.

It is further evidence of the power of arts and culture to bring the peoples of Europe closer together. The five cities were united in their desire to find solutions which will enable them to realise their cultural ambitions and further develop their cultural integration with people across Europe.

The meeting with DCMS was positive and we were encouraged by their commitment to try and resolve this issue with the European Commission and agree a clear way forward for the cities involved.

We urged the Department to continue its negotiations with the European Commission on the legitimacy of its latest decision. In particular we wish to highlight that the announcement by the European Commission counters a very recent decision of the European Parliament in June 2017 and of the Council in September 2017 which includes a calendar confirming the UK as the host country in 2023.  In addition we are seeking clarity given that the United Kingdom has not yet left the EU and the terms of that departure are not yet agreed.

We have collectively therefore requested that DCMS takes further advice on the legal status of the announcement as a matter of urgency.

The meeting also allowed us to consider jointly how we ensure the local energy, enthusiasm and work done by our cities and partners to date can be positively harnessed and recognised even if the Commission maintains its position.   This sudden change of heart has the potential to disrupt well over 100 cultural collaborations across the continent which bidding cities have been developing in good faith.

We all recognise the urgent need to reach a conclusion in a timescale that allows us to harness the momentum in our cities.  Therefore intensive and constructive discussions will continue over the coming weeks.

2017 will mark the 50th year since Milton Keynes was officially designated and to celebrate, MK plans to host city wide events and activities that will be open to the local residents and visitors alike.

This is a special milestone for Milton Keynes, not just because it has been 50 years, but also because some of the major contributions that the city has made over the past half-century.

Milton Keynes is centre to some of the World’s most important discoveries. It is the home of some very influential pioneers, visionaries, artists and it holds significant Heritage that has helped shape our world in ways that you may not know.

From the WWII Code Breakers of Bletchley Park right through to the set location of iconic films such as Superman IV, Milton Keynes is a treasure trove of innovation, historic relevance and celebrity stopping place; the city is bursting with heritage & culture that deserves to be recognised.

Amongst the many exciting activities set to take place next year, AHA-MK and Partners are in the process of developing an innovative project that will be unlike anything the city has seen yet – A Digital Landmark Trail focusing on 50 of MK’s most iconic landmarks to date.

What is special about Milton Keynes? Some would be inclined to ask such a question; others dismiss it as a city with one to many roundabouts and a shopper’s paradise, but hidden behind the misconceptions lies a City with a remarkable heritage and cultural scene.

Discovering MK aims to showcase this and will take participants on a fascinating tour around the City, stopping at some of MK’s most characteristic landmarks and informing them about its impressive history along the way.

Discovering MK will be a fun filled trail with lots of occasions that the whole family will enjoy, but rest assured individuals of all ages and backgrounds can join in on the fun too.

The level of collaboration and co-operation shown by our members and partners continues to impress us – we are working hard to make this process as easy as possible.  SoC 2012 was a pioneering year, which proved to the sectors the value of working together on a large-scale joint venture and Made in MK has allowed these relationships to develop even further.  By pulling together in this way, MK arts and heritage organisations are able to achieve a critical mass, and promote a cultural offer that spans the Borough.

Funding for this project came from four sources:

Organisations involved in AHA-MK have told us that they were very pleased to be involved in this project:

‘Made in MK’ provided a strong legacy for the 2012 Summer of Culture programme, contributing to Milton Keynes’ aspiration to be distinctive and World Class.  (David Hill, MK Council)

The Gallery was delighted to support the ‘Made in MK’ campaign.  Thematically, it linked perfectly with our summer exhibition and events programme ‘MK Calling’ (Katharine Sorensen, MK Gallery)

‘Made in MK’ played an important role in helping to bring many of the disparate creative programmes across MK together into one cohesive audience offer. (Jessica Rost, MK Festival Fringe)

AHA-MK exists to promote, develop and represent the arts and heritage of Milton Keynes.

We promote, lobby and represent… We support, develop and train… We network, share and inform… Above all we collaborate.

This year our members have contributed to:

With a mission to bring together organisations that create exciting experiences in art and heritage, AHA-MK promotes Milton Keynes’  unique identity to local,regional and national audiences.